Good people can do terrible things...

It began with The Cove. Now the suspense continues in the second book of the Devil’s Cove Trilogy.

Devil’s Cove used to be a safe place to live. Until a serial killer was caught hiding behind a familiar face.

As the Cornish community reels in shock, missing teen Cal has been implicated in the murders. Desperate for answers, his mother Carrie is determined to track him down. But so is someone else…

Crime writer Aaron Black has arrived in town on a mission to save his ruined career by writing a bestseller about the killings. But he needs Cal, and he’ll do anything to find him, even if it means endangering lives.

Because there’s more to the horrifying truth than anyone can imagine. And for Carrie and her family, the real nightmare is only just beginning. 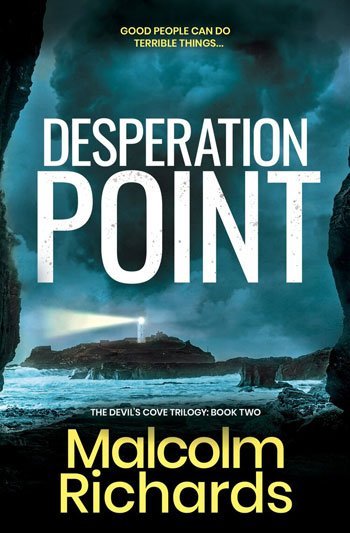 The scream was piercing and racked with pain. Ross Quick’s eyes snapped open and stared into darkness. He sat up, his head spinning. Somewhere below him, Meg’s barking was angry and urgent. Ross had fallen asleep in his clothes. An empty bottle of gin lay next to him on the bed. He was still drunk. Nausea and disorientation climbed his throat.

It took him a moment to remember the scream. He turned to look at the bedside alarm clock. It was just after 2 a.m. Had he been dreaming? Meg’s incessant barking said no.
Swinging his legs over the side of the bed, Ross took a moment to find his balance. Cold air bit his feet as he staggered through the darkness to the window.

He had left the curtains open. This far out in the countryside darkness was absolute, and now winter had settled over the land like a death shroud, there was no escaping it. Darkness greeted him in the morning and whispered him a goodnight. It made the solitude of his existence on the farm even more of a void; made the allure of alcoholic oblivion much more tempting.

Pressing his face against the glass, Ross stared into the yard. It was too dark to see anything. Downstairs, Meg was growing frantic.

The dog’s barking continued as he stumbled from the room. The cold was worse out here, attacking him through his clothes, freezing his breath in frosty plumes. Shivering, Ross flipped on the light switch and squinted at the low-ceilinged landing. A dull throb had started at the base of his skull and was now reaching up to drag nails across his scalp.

Taking the stairs two at a time and yelling at the damn dog to shut up for a minute, Ross descended into darkness. Mistiming the last step, he slipped.

His feet went out from under him. His right temple slammed against the wall. Ross lurched forward and hit the floor.

He groaned as pain shot through his body. The dog’s barking grew to an unbearable crescendo.

Ross pushed himself up to a sitting position and checked for damage. There was no blood, but a lump on his temple was already surfacing.

The drinking needed to stop. It had been getting worse lately; this need to lose himself at the bottom of a bottle each night. But what would he replace it with? He was alone out here. His evenings felt vast and empty, as if he were lost in darkness and waiting to die.

Allowing a minute for the farmhouse to stop spinning, Ross hauled himself back onto his feet.

He staggered along the hall in the direction of the kitchen, Meg’s barking driving nails through his skull.

Throwing open the door, he flipped the light switch and stared across the cluttered kitchen.

Cold seeped through the flagstone floor and gripped his bones. The black and white Border Collie was at the back door, her nose pointed upward as she filled the room with noise. Lurching across the floor, Ross laid a clumsy hand on the dog’s head.

Meg’s barking came to an abrupt halt and was replaced by a deep, guttural growl. Pulling back the curtain of the kitchen window, Ross peered into the yard. Still unable to see anything, he reached across and flipped a switch. The exterior light blinked on. Shadows receded, hovering at the edges.

Ross cocked his head, trying to listen above Meg’s growls. The yard was still. He heard no more screams.

Perhaps it had been a fox that had woken him. It would explain Meg’s behaviour—she hated the animals. Ross wasn’t fond of them either; last year, one had broken into the coop and slaughtered half of his hens.

He’d since made the coop more secure. But foxes were sly. If there was a way in, no matter how imperceptible, they would find it.

As Ross stared into the backyard, he was struck by a sudden realisation. With all the noise Meg was making, the sheep were being unusually quiet.

Pulling back the locks, he opened the door.

Cold rushed in. Meg bounded out, shooting across the yard and disappearing into the darkness.

Ross yelled after her. That damn dog was going to be the death of him. Grabbing a wax jacket from the back of the door, he slipped his feet into a pair of boots then stepped outside. Motes of dust and frost drifted through the air. His teeth chattered. Very quickly, he was sobering up.

He turned his head, staring into the night. Meg was still barking somewhere in the near distance. If there was a fox on the property, the dog would chase it away. But if it was something else . . .

An uneasy feeling reached out from the darkness and coiled around him. Returning to the house, Ross grabbed a torch from the kitchen window and his shotgun from a locked cabinet in the hall. It was already loaded with two shells, but he filled his pockets with more.

Now completely sober, he switched on the torch, and with the shotgun perched over his right arm, he crossed the yard.

A narrow beam of light illuminated his mud-splattered Range Rover and an abandoned shell of an old harvester.

Meg’s barking echoed in the night.

Passing outbuildings, Ross pointed the torch in the direction of the chicken coop. He could hear the chickens clucking anxiously inside, unsettled by Meg’s barking, but the coop looked undisturbed and the ground was clear of feathers and blood.

Perhaps the fox hadn’t been able to break into the coop, after all. Perhaps Meg had scared it off.

Stumbling forward, Ross reached the large wooden barn. Meg appeared in the light. She glanced back at him, acknowledging his presence, then returned to growling.

After a day of bitter cold and rain, the sheep were inside for the night to dry off. They were eerily silent.

Meg’s head was down low, her teeth glittering in the torchlight.

Foxes rarely bothered with sheep, unless it was lambing season. Perhaps a stray dog, then?

His brain caught up with his vision. Ross tightened his grip on the shotgun. Once, last week, he’d been drinking before bringing the sheep in and hadn’t closed the barn doors. The sheep had wandered all over the farm and it had taken him and Meg most of the next morning to herd them back to their usual field.

The barn doors were shut now. There was no stray dog. No animal of any kind.

It was unusual. People didn’t tend to trample through the countryside at night, especially mid-winter.

Staring at the barn doors, Ross remembered the scream that had woken him. He felt the sudden urge to wrench open the doors and rush inside.

The sheep were his livelihood. The food that he put on his table. The clothes he wore on his back. No harm could come to the sheep because if it did, harm would come to him.

Unnerved by the silence, he watched as Meg sniffed the bottom of the barn doors and scratched the ground with a paw.

Brushing her to one side, Ross tucked the torch under his arm and removed the latch. The doors swung open.

His breaths came fast and heavy. Ross aimed the shotgun into the darkness.

Meg immediately began barking. But she wouldn’t go in.

“Someone there?” Ross called out. “You’re trespassing. I’ll give you ten seconds to leave or I’ll fire.”

The shotgun trembled against his forearm as he spread his feet and waited. There were no sounds. No bleats. No shifting of wool or bodies.

The smell hit him; deep and coppery like rusted metal. Lowering the shotgun, Ross lifted the torch and pointed it into the barn. Meg’s barking grew to a skull-splitting crescendo.

The torch shook in Ross’ hand. The shotgun swung limply by his side.

The sheep lay scattered across the barn, unmoving. The blood was everywhere, splattering their white wool, soaking the ground, painting the walls.

They were dead. All of them. Every last one.

And not only dead. Parts of them were missing.

Ross stared at the massacre, his head swinging from side to side, his lips twitching up and down.

The stench of death was overwhelming.

Meg barked and growled and scratched at the ground. Ross staggered back. The world spun around him. An anguished, guttural sound climbed his throat and shot from his mouth, shattering the night. 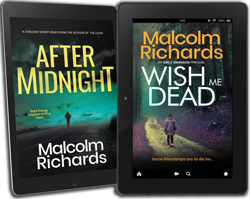